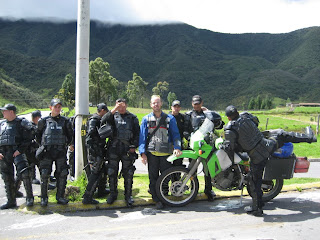 Below is written by a brit that Joshua picked up by the name of Vicky Wake...


Joshua and Vicky both went down the World's Most Dangerous Road in Bolivia...


Hey - this is the Brit here, i joined this epic adventure in La Paz, Bolivia on the 19th of August. This is my commentary on the following week or so of motor-cross bike riding (rear seat for my part.) 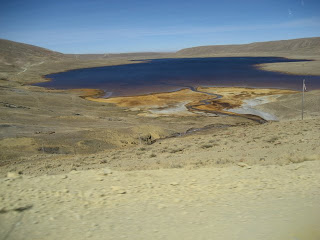 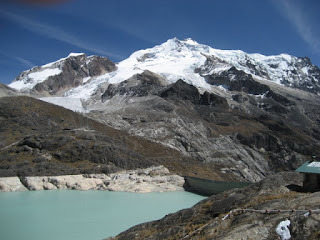 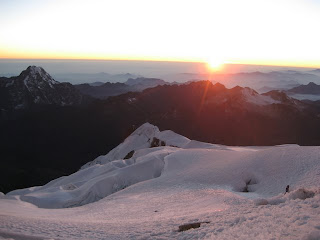 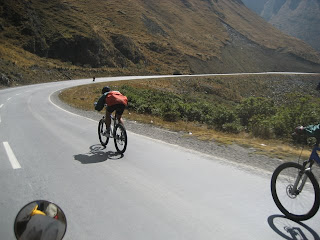 So we set off from La Paz, Josh having reassured me that he had an excellent sense of direction - we immediately headed to 'Zona Sur,' which was entirely the opposite direction to where we needed to be going to exit the city - luckily Josh isn't shy of asking directions and we promptly headed up to the north of the city and left through 'El Alto.' The first day started well, good roads, excellent views of the mountains and no more getting lost, it wasn't too cold and the bike at that point was reasonably comfortable. This all deteriorated as the day progressed - everything bar the views which were great the whole ride through. So we stopped for lunch at Oruro and changed the oil (documented by film) and investigated the possibility of taking the train down to the south. We arrived at the train station where i proceeded to fall off the bike landing flat on my back, this was both painful and and embarrassing, i think i masked this well by laughing insanely for at least five minutes. Josh laughed heartily and didn't help me up, shock horror! We opted for the road as the train was going to a bit more expensive (and they say that the British are tight with money?!) The roads from here on were pure crap - deep sand, uneven, unmarked and at times almost in-passable! Despite all this we had great views and managed to get some good pics, eating dirt all the way. We arrived at a small village in the dark - we weren't sure where we were, for my part i didn't care i just needed to get off the back and sleep. The place was okay - kind of clean with toilets and hot food, actually a relative oasis in comparison to the thought of camping out in the open for the night. My body had ceased to move in a natural way at this point - my hips felt as if they may never recover - as if i had been riding a horse for the last 6 hours! Josh looked equally as beat, dirty and every year of his age!! 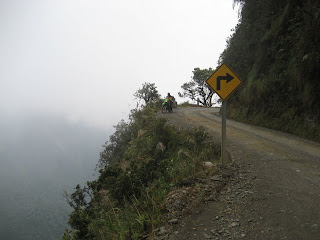 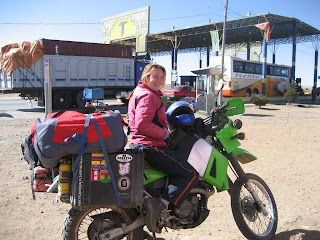 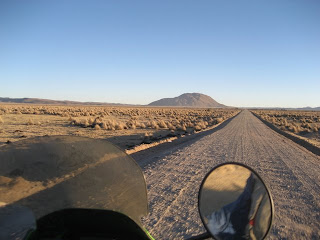 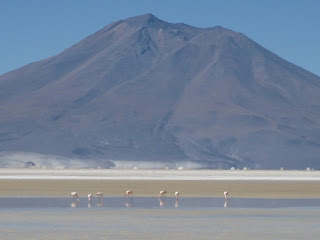 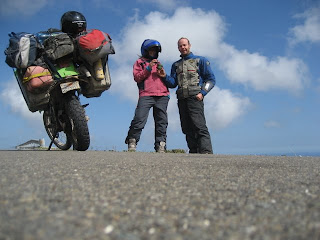 The following morning started reasonably early at 7 ish. We set off with a full flask of mate de coca and headed towards the Salt Flats on yet another fantastically crap dirt road! This didn't last too long and we soon cruised onto the relative smoothness of the Salt Flats , which Josh insisted on referring to as ice. Just how cold this stretch of the trip was i cannot describe in words, i did almost want to cry (but i didn't for fear that the tears would freeze!!) So this wide expanse of retina burning salt was being harvested for sale, used to build hotels on the flats and drawing tourists from all corners of the globe. It was quite a sight - as far as the landscape was flat there was salt covering the ground, ceasing to exist only where the mountains rose up out of nowhere to interrupt the serene whiteness. We encountered an island in the middle of this wide expanse, it's main inhabitants cacti, tourists and restaurants. It was an amazing and most welcome sight to me at this point - very randomly and ingeniously placed. We stopped here for some time and had lunch - well i made an attempt at eating - i had lost my appetite as the journey had started and it had not yet recovered - excellent diet plan i think! 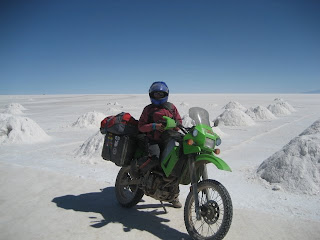 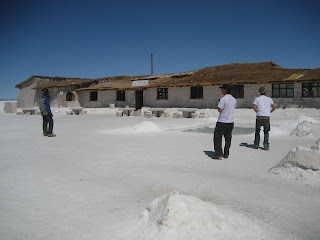 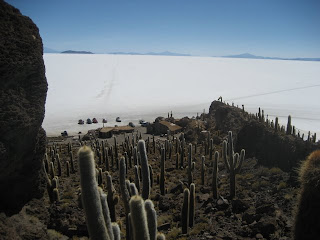 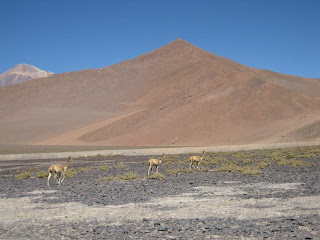 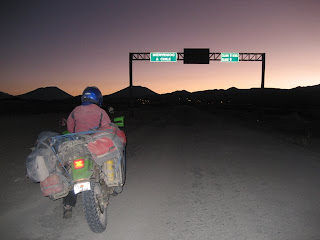 So after meeting and chatting with random people and some Italians (if i recall correctly) about the joys of motorcycle trips (i left the majority of this chatting to Josh - he's far more qualified for this kind of conversation than I am) we set off again for the Chilean border. Whilst we had taken the break i decided to apply my scarf to my neck and sore throat, since that day my scarf has only left my neck for the purposes of cleaning my body - I have most definitely appreciated and bonded with my scarf within the last week - i will never disrespect or take my scarf for granted again. So we found the road/track for the border at which point Lechuga decided to give us little a scare and just stop. I think this may have been due to the fact that Joshua had plugged all of his electrically heated clothing into the battery and zapped all of Lechuga's precious energy!! I found the fact that his clothing could do this to the bike and that she had stopped in the middle of nowhere a touch alarming and so laid on the floor for a while. After recharging our batteries and being passed by some selfish arse tourists in a jeep (who didn't stop) we pushed Lechuga down the track engaging all our remaining muscles (which for my part was about 6 i think!) We finally reached the border crossing just as the sun was going down. It was in the middle of nowhere and there was very little going on - as soon as the formalities had been done we found accommodation and settled down for the night.

The next morning was much better and as soon as we set off I was feeling considerably better having regained the use of my body overnight. We passed through some mountains and skirted another salt lake after which we encountered a beautiful lake of pink and turquoise blues inhabited by pink flamingos and against a backdrop of smooth mountain peaks and bright blue skies. This could well have been the highlight for me so far, the scene was tranquil, peaceful and infused with the soft colours of nature - untouched by human hands as far as I could see. We continued on the track which steadily got worse and deteriorated into deep sand which at one point almost put us in a heap on the road side. It was of course my sheer strength that kept us upright - Josh may have helped a little :0! We reached the city of Calama by 2pm and stopped for lunch, an oil change and I almost adopted a small white dog (all he needed was a bit of love and a good bath.) But common sense overcame me and we left for the Chilean coast on good roads but with much side wind. We reached Antofogasta in the dark just after 7pm, this was going to be one of the trends of the trip for us - we would without fail arrive into every destination in relative darkness. Antofogasta was nice as far as first impressions went and the sea front was cute with many palm trees - we foolishly attempted to get a room in the Raddisson which was clearly out of our budget even if they had have admitted two dusty scruffy waifs like us into their very flash hotel. We found a place to stay which was nearer the centre and it had hot water in no short supply which was heaven.

So the next morning started with a nice breakfast and then a ride along the sea front to take lots of photos. We set off on an inland road in the direction of Santiago - it was both windy and cold and we went very fast it seemed. We stopped for a quick lunch at a small sea side town and then continued again. This day of biking was largely boring - most of it was through a desert but when we reached the coast it was a nice change to see the waves of the South Pacific breaking against the jagged rocks of the Chilean coast. We stopped for the night in a small town inland of the coast and stayed in hostel on the town square. Emailing took first priority followed by pizza and half a bottle of wine for Josh, which had a terrible affect on his personality. He suggested that we order a dessert and then proceeded to steal every piece I had on my fork, I was amazed by his gentlemanly and mature manners. This man never ceases to surprise me. This was followed by him playing hide and seek in the square on our way back to the hostel.
Posted by Unknown at 9:55 AM